Colonization, Slavery, and Path Dependencies in the Fossil Economy 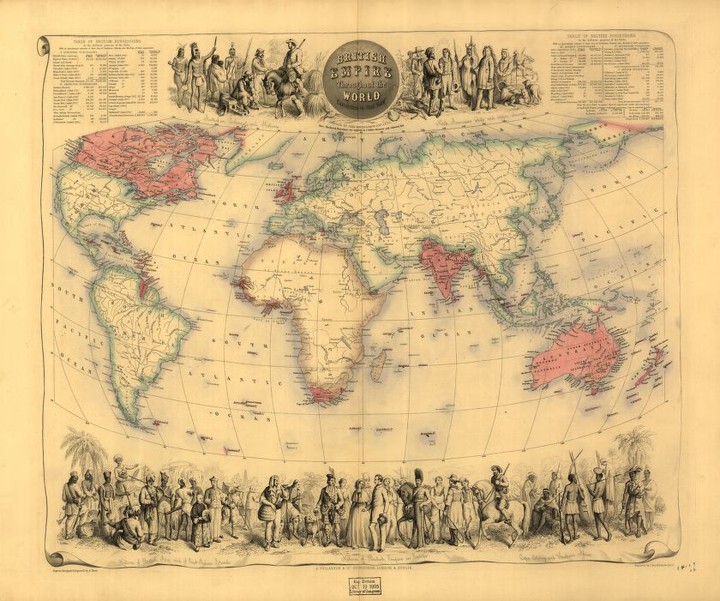 Source- Bartholomew, John. ca. 1850. British empire throughout the world exhibited in one view.

The making of our modern world rests upon the expansive, ongoing reorganization of peoples across the globe, as well as the socio-ecological relations that have characterized their societies. One of the primary tools used to carry out this reorganization was racialization. The social construction of race facilitated and justified the enslavement of millions of people whose expropriated labor provided much of the fiber and energy that acted as the foundation of the industrial revolution. At the same time, colonial and settler-colonial processes provided access to resources and markets that were necessary to the ceaseless growth of industrial activity and warfare. These processes played a fundamental role in shaping the infrastructures, built environments, economies, political regimes, trade networks, race constructs, distribution of resources, and distribution of power that modernity is built upon. In this project my co-author, Julius Alexander McGee, and I explore the ways in which the histories of slavery, settler colonialism, and colonization are bound to the seemingly unstoppable inertia of the fossil economy. We use quantitative and historical methods to explore how these modes of social control set nations on different development pathways in an increasingly globalized economic system. I argue that making a globalized system of production, consumption, and disposal sustainable without also addressing the network of relations that was intentionally built upon racialized logics in order to facilitate mercilessly efficient systems of economic development - predicated on the pursuit of growth - may not be possible, and is far from just. This project points to the need for direct intervention in historically entrenched forms of inequality, as well as where such interventions might best be aimed.

I am interested in the relationships between development, inequality, and environmental change.