How do slums change the relationship between urbanization and the carbon intensity of well-being? 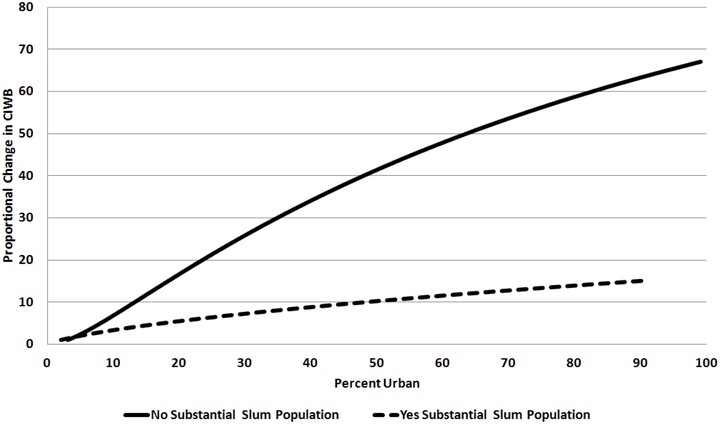 This study examines how the relationship between urbanization (measured as the percentage of total population living in urban areas) and the carbon intensity of well-being (CIWB) (measured as a ratio of carbon dioxide emissions and life expectancy) in most nations from 1960–2013 varies based on the economic context and whereabouts of a substantial portion of a nation’s urban population. To accomplish this, we use the United Nations’ (UN) definition of slum households to identify developing countries that have substantial slum populations, and estimate a Prais-Winsten regression model with panel-corrected standard errors (PCSE), allowing for disturbances that are heteroskedastic and contemporaneously correlated across panels. Our findings indicate that the rate of increase in CIWB for countries without substantial slum populations begins to slow down at higher levels of urbanization, however, the association between urbanization and CIWB is much smaller in countries with substantial slum populations. Overall, while urbanization is associated with increases in CIWB, the relationship between urban development and CIWB is vastly different in developed nations without slums than in under-developed nations with slums.